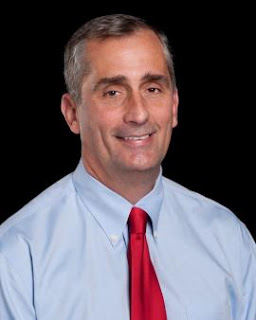 Intel is going to double down on its Atom processors for mobile products, leading to more low-cost laptops, the company's CEO said during Intel's second-quarter earnings conference call on Wednesday.
Intel will make mobile Atom chips an equal partner with its mainstream PC processors and will push Atom into sub-$300 laptops and convertibles and $150 tablets, said new CEO Brian Krzanich.
"We're putting much, much [more] effort on Atom," he said.
The first major new Atom product to launch under Krzanich will be "Bay Trail" -- a completely redesigned Atom that gets closer to mainstream Intel Core i series chips in performance.
"Bay Trail allows us to get into these markets that we aren't in...in a big way today. We expect to see touch-enabled clam shells [laptops] coming down to the $300 range, convertibles [tablet-laptop hybrid] to the sub-$400 range," Krzanich said.
He added that Bay Trail-based tablets may even get down to $150.
Stacy Smith, Intel's chief financial officer, said Intel tablet "volume" will quadruple from the first quarter this year to the fourth quarter.Intel reported second-quarter earnings Wednesday. The chipmaker said revenue fell to $12.8 billion, down from $13.5 billion in the same period last year.

Posted by Martin at 9:22 PM No comments: